If anyone is looking for an engrossing novel about flawed characters trying to do the right thing – but inevitably failing to do so – let me suggest Lisa McInerney’s The Glorious Heresies. The novel is set in Cork, Ireland. Her prose cuts to the bone. It is as funny as it is bittersweet and heartbreaking. Shame, poverty, violence, and addiction stymie human connection. It’s a must-read. I could not put it down at night. If it sounds grim, it is. But she manages to balance it with gallows humor. As the kids say, I lol.

Just finished The North Water by Ian McGuire. I cannot recommend it highly enough. On the surface, it’s a story of survival set in the frozen waters near the Arctic Circle. But beneath the ice – amidst pedophilia, rape, murder, and starvation – is a damning condemnation of free-market capitalism, unfettered regulation, and the mass plunder of natural resources. Read this book now.

SILVERMAN and Hamilton Square Condominium Association present  “Roger Sayre: Sound and Vision,” curated by Brendan Carroll. Sayre is an artist driven by ideas who often uses unconventional materials to create his work—LP record album covers, fog juice, step ladders, vinyl folding chairs. What unifies his varied body of work is the sense of playfulness in which the pieces were considered and then realized.

For “Sound and Vision,” Sayre will present roughly two-dozen image-based works that include a new series of lens-less photographs, as well as collages made up of illustrations clipped from dictionaries, cassette tapes, and found photographs. Despite the variety of techniques, materials, and approaches to image making, the work on view in this exhibition is inspired by music in some form. The title of the show, “Sound and Vision,” refers to the song of the same name from David Bowie’s 1977 album Low.

The Halo series is a continuation of Sayre’s two-decade exploration of handmade lens-less photography. Each image is unique, more like a painting than a photograph. There are no negatives, no editions. This work has the immediacy of abstract drawings. They look like no other photographs. At times, the colors, forms, and textures suggest religious auras, radioactive nimbuses, solar and lunar eclipses, and black holes. At other times, they resemble bodily orifices, eyeballs, and entry and exit wounds.

Historically, the process he uses is similar to the one originated by Henry Fox Talbot, one of the early pioneers of photography. Sayre comments:

“Although we live in a world of digital photography, my work has always been informed and inspired by the basic tenets of the process. The kernel of all photography is light striking a light-sensitive surface. The procedure behind The Halo Series stops there. The pieces are made by illuminating photosensitive paper with filtered colored light in a dark room, forgoing both the camera and the film negative.”

Sayre’s hands-on experience in the darkroom is one of invention and discovery. Each photograph receives a minimum of seventy-two exposures that vary in time and color filtration. One piece often informs the creation of another.

The Halo Series is a result trial and error, as much as cause and effect. “When a piece works, it is like hitting a vein of ore after digging for weeks,” notes Sayre. “A success is a rarity, but very satisfying and a result of all the previous work.”

For his collages, Sayre uses the same spirit of improvisation and discovery to create his idiosyncratic orchestras. He combs through old dictionaries to find illustrated depictions of musicians, which he arranges into one-of-a-kind ragtag ensembles of instrumentalists. Sayre does not approach a collage with a preconceived outcome. He has an open mind and lets the process of trial-and-error guide his decision-making.

Roger Sayre (b. 1963) received his B.F.A. from Bowling Green State University in 1985. He received his M.F.A. from Pratt Institute in 1992. Sayre has collaborated with artist Charlotte Becket on a series of public projects that explore and reframe environmental materials and contexts. Last year, they won Socrates Sculpture Park’s 2015 Emerging Artist Fellowship. Sayre cofounded (re)mixed media, an ongoing collaboration with artist David Poppie. Sayre’s works have been featured in Bronx Museum of the Arts, Jersey City Museum, Shore Institute of Contemporary Art, A.M. Richard Fine Art, Allen Priebe Gallery (University of Wisconsin), Regina Gouger Miller Gallery (Carnegie Mellon University), among others. His works have been reviewed in The New York Times, The Pinhole Journal, Flash News, and Pittsburgh Tribune. He has won numerous awards, including the 2015 Artist Fellowship Award from the New Jersey State Council on the Arts. He lives and works in Jersey City, NJ.

The exhibition will be on view atHamilton Square Condominium Association through August 31, 2016. For further information, please visit us at SILVERMAN or call number (201) 435-8000. Hamilton Square is located at 232 Pavonia Avenue in Jersey City, NJ.

“Roger Sayre: Sound and Vision” is the thirty-first exhibition that Brendan Carroll will organize for SILVERMAN. For additional information on the artist, go here: rogersayre.com. 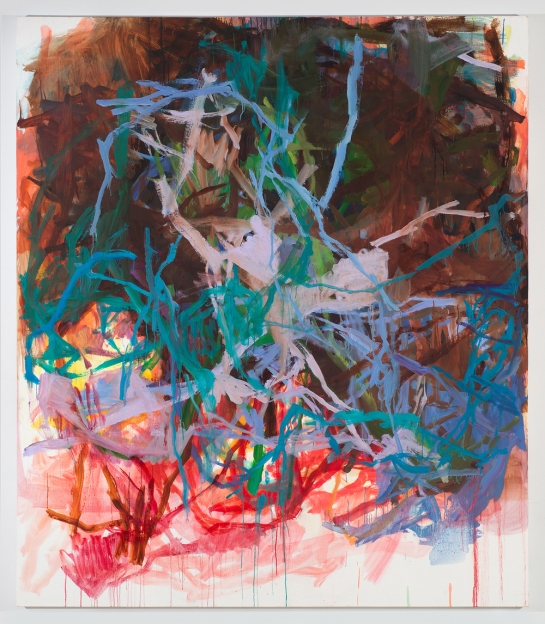 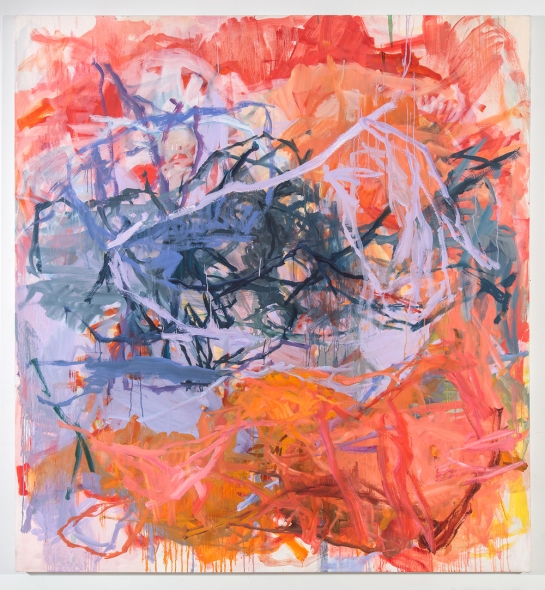 Directions from Lower Manhattan to the Majestic Theatre.

Directions from Brooklyn to the Majestic Theatre.

SILVERMAN AND MAJESTIC THEATRE CONDOMINIUM ASSOCIATION presents “Beth Gilfilen: Nightcrawler,” curated by Brendan Carroll. This exhibition features a selection of 10 abstract paintings completed in late 2015 and early 2106. Each painting is oil on stretched canvas or linen. Gilfilen’s paintings are built through layers and layers of dynamic brushwork, the wiping away of paint, antagonistic color play, and spatial complexity. Intuition, spontaneity, and improvisation inform her work as much as formal considerations. The results invigorate.

Gilfilen’s dynamic compositions with no fixed viewpoint are animated. The paint roils and seethes across the surface in seemingly perpetual motion. Within the picture plane, intersecting lines and conflicting colors create an undeniable energy. These paintings appear as a conflagration, a dustup, and an apparition. The eye rarely has a place to rest. Within the melee, a form may emerge: an insect, bones, or a tree.

Gilfilen does not approach a blank canvas with a preconceived notion. She has an open mind and lets the painting tell her what it needs next. “I don’t really have any strategy,” she says. ‘[Painting] is very intuitive and changes the moment I begin. I don’t like formulas, and I want the painting to take whatever route it needs to take.” The subject and object of her work is the search to discover elusive forms in the act of painting. Resolution is not a forgone conclusion. Form is not always discovered. The journey, not the destination, is the key.

Although her paintings give the impression they were created during an uninterrupted burst of activity, they more often than not develop in time, in deliberate increments. Her paintings begin with drawing. Accumulated marks grow and deviate. Sometimes when she sees a recognizable form emerge, she negates it. Part of Gilfilen’s process is to sit with her paintings in order to identify what the marks and the forms might be trying to tell her. She works on several canvases at a time, each one influencing the next, in constant call and response. “I enjoy this complicated relationship to the painting that develops over time and across a body of work,” notes Gilfilen.

Line, the individual brushstroke, forms the backbone of her work. Gilfilen’s calligraphic approach leads the eye around the canvas and form the essence of her paintings. Whether thick or thin, straight, diagonal, or curved, lines have a depth, weight, character, and descriptive power.

“I love line and think it captures everything: a record of time, a description of edges, rhythm, emotion, authorship,” she notes. “I want the paintings to come out of that.”

What is thrilling about her paintings is how they straddle the line between frantic scrawl and idiosyncratic calligraphy. Is the viewer looking at childlike scrawl or purposeful arabesques, which pirouette around the picture plane in the hope of finding an elusive image or form?

Gilfilen’s gestured-based work shares stylistic affinities with the New York School, but she is her own artist with her own set of priorities. Unlike her predecessors, she is more interested in illusion and the conjuring of hidden forms from the act of painting. “I want to make those actions into things,” Gilfilen remarks. When asked what separates her work from Abstract Expressionists, she says “We are all just pulling out the threads of the fabric of what we have seen, or the paintings we identify with, and reweaving them. It is like the folk songs that are passed down and rewritten with a slightly different rhythm in the next generation.”

One of the joys experienced when looking at Gilfilen’s paintings is wrestling between two forces: On the one hand, viewers may try to identify a recognizable shape; on the other hand, they may find themselves just taking in the painting itself, surrendering to the spectacle. Gilfilen is aware of the seemingly contradictory forces in her work, and how they may undo or undermine each other. She states:

“For me, there is a huge tension between the basic immersion in making the painting and what that can come to suggest. The work grows as I work, and I have to suspend my expectations of what I think it will be. To be right at the edge of recognizing form is very invigorating, and it surprises me, but only feels true when I have been completely present with the elements of painting. When this happens, I feel I can grasp something made-up, invented, but also sort of “real” or concrete. I love the chase between what slips right into the visual consciousness as I am making the painting and [what] slips away. Every slight move or shift of the line changes the outcome, so yes, I am continuously undoing the painting in my quest to find it!”

The hidden forms in her thickets of lines reside on the tip of the tongue. Part of the fun at looking at her work is trying to match the association to its word.

Elizabeth Gilfilen is an artist based in Brooklyn, New York. She received a BFA from the University of Cincinnati and an MFA from Virginia Commonwealth University. Awards include Yaddo, The Marie Walsh Sharpe Foundation Space Program, Gallery Aferro Studio Residency, Alijra Emerge Fellowship, and The Bronx Museum’s AIM Program. She was invited to make prints at Oehme Graphics in Colorado and was a Studio Immersion Project Fellow at the Robert Blackburn Printmaking Workshop in New York .

The exhibition will be on view at Majestic Theatre Condominium Association through June 30, 2016. For further information, please visit us at SILVERMAN or call number (201) 435-8000. Majestic Theatre is located at 222 Montgomery Street in Jersey City.

“Elizabeth Gilfilen: Nightcrawler” is the thirtieth exhibition that Brendan Carroll will organize for SILVERMAN. For additional information on the artist, go here: elizabethgilfilen.com.

Transportation directions from Lower Manhattan to the Majestic Theatre in downtown Jersey City.